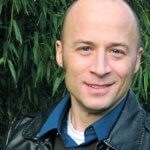 The Losing Role by Steve Anderson was the first self-published book, and the first e-book, that I read. I was very impressed, and I’ve since read his novels False Refuge & Besserwisser and the non-fiction Kindle Singles Sitting Ducks and Double-Edged Sword. Anderson has written short stories and screenplays, and was a Fulbright Fellow in Munich, Germany. He currently lives in Portland, Oregon.

Russell Phillips: Most of the characters in The Losing Role are fictional, but SS Lieutenant Colonel Otto Skorzeny is a notable exception. How accurately do you think you captured his personality?
Steve Anderson: He’s only in the novel briefly, but I hope I captured something basic about him. To best serve the story I have him as a type of wartime celebrity, the propaganda hero who can do no wrong, and the reality in the research seems to back this up. I tried to imagine him equal parts sports legend, Hollywood producer, and patriotic warrior but one who’s floating above the gritty realities of daily soldiering. An unfortunate character like my main character Max is just one of many means to a grander end.

RP: If The Losing Role was made into a film, who would you like to see playing Max?
SA: Great question! As an actor he’s handsome but in a flawed way. Slightly cheap and shady looking, yet with a glint in his eyes. Someone like Christoph Waltz or Sebastian Koch would be great, if we’re talking about German-speaking actors. Philip Seymour Hoffman (with hair dyed dark) could pull it off. Clive Owen or Russell Crowe, if either could learn to smile. Robert Downey Jr, certainly. I could play this game all day.

END_OF_DOCUMENT_TOKEN_TO_BE_REPLACED

The Christmas in July sale has started at DriveThru RPG, and will run for one week. All of my books (other than The Bear Marches…

END_OF_DOCUMENT_TOKEN_TO_BE_REPLACED

The Wargame Vault Summer Campaign Sale has just started, and will end at 18:00 (UK time) 16th July. All of my books are included. If…

END_OF_DOCUMENT_TOKEN_TO_BE_REPLACED

I’m happy to announce that A Fleet in Being has been named as a finalist in the Military Non-Fiction category of the Global Ebook Awards.…