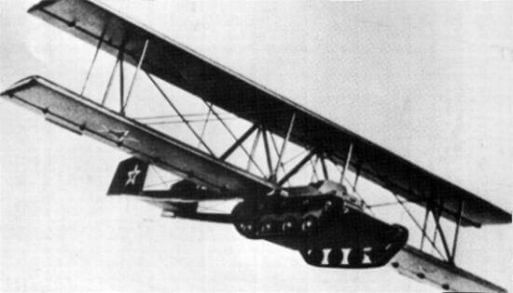 Inspired by Tim Gow’s A to Z of Wargaming series of posts, I’ve decided to do an A to Z series of blog posts around the theme of AFVs (Armoured Fighting Vehicles). Hopefully I’ll be able to find some interesting subjects.

I think it’s fair to say that the Antonov A-40 flying tank qualifies as interesting. Airborne troops can be vulnerable, because they can’t use heavy support weapons or vehicles. The A-40 was an attempt to address this problem, and provide them with some armoured support. The Soviet Union had previously experimented with dropping vehicles by parachute, but was not satisfied with this method, since the crews had to be dropped separately, and may land some distance from their vehicle.

The A-40 was a T-60 light tank with the addition of glider wings, fuselage and tail. Only one flight was attempted, in September 1942, during which the towing aircraft had to release the glider early, due to excessive drag. The glider was flown down to the ground without any problems, and after removing the glider attachments, the tank was driven back to base. Although the tank did fly and land safely, the idea was dropped. Eventually, the Soviet Union managed to perfect dropping BMDs by parachute with their crews inside.