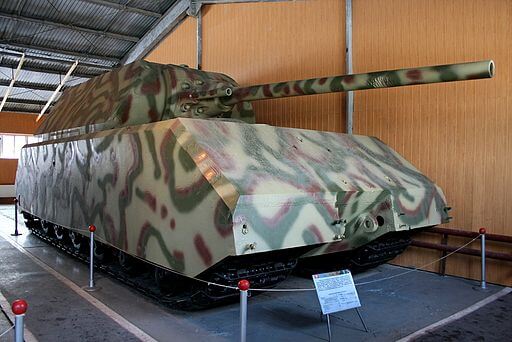 A turretless prototype was ready by the end of 1943, and tests were carried out with a mock turret. The extreme weight meant that Maus could not cross bridges, and so an alternative solution had to be developed. Its huge size meant that it could ford relatively deep rivers. For others, a snorkel was developed that allowed it to cross rivers up to 45′ (13m) deep – when snorkelling, a second Maus would provide electrical power through a cable. Maus was armed with a 128mm gun, with a 75mm co-axial gun and a 7.92mm machine gun. Speed was only 8.1mph, with a range of 99 miles on roads, dropping to 39 miles off roads.