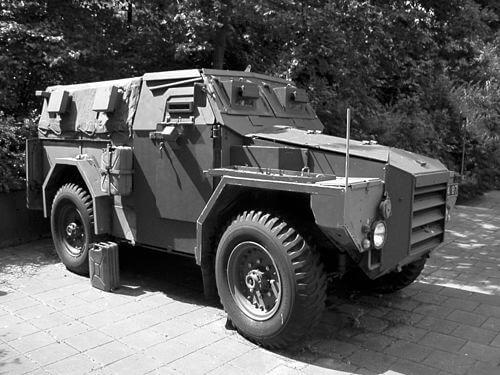 The Pig was a simple wheeled armoured personnel carrier, created by fitting an armoured body to a four-wheel drive 1-ton Humber truck. It was intended to be used only as an interim vehicle, until purpose-built APCs were available. However, when the British Army was deployed to Northern Ireland at the start of the Troubles, some form of armoured transport vehicle was needed. The Pig was deemed ideal for this purpose, since it in no way resembles a tank – it simply looks like what it is, an armoured truck.

As the Troubles continued, a Mark II version of the Pig was introduced. This had improved armour and heavy duty bull bars for breaking through barricades. Other specialised variants were created for use in Northern Ireland: the “Flying Pig” had fold-out riot screens on the sides and roof. The “Holy Pig” had a roof hatch surrounded by a perspex screen. The “Kremlin Pig” had wire screens for protection against shaped charges (particularly the RPG-7). The “Squirt Pig” was fitted with a water cannon. The “Foaming Pig” had a foam generator to minimise the effect of explosive devices. The “Felix Pig” was modified for use by use by Explosive Ordnance Disposal (EOD) teams.

The Pig was also used as the base vehicle for the Hornet, an earlier entry in this series.