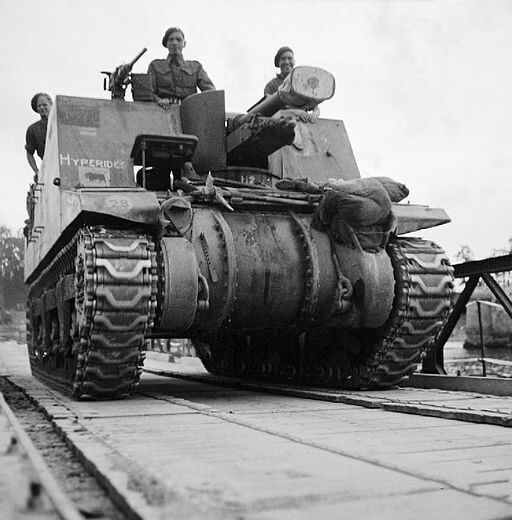 By 1942, the British army in North Africa had decided that it needed self-propelled guns, and the hastily-created Bishop self-propelled 25 pounder wasn’t good enough. They had adopted the American M7 Priest, but this was a logistical nightmare, since they were the only vehicles in British service that used a 105mm gun. What the British army really wanted was something like the Priest, but with a 25 pounder instead of a 105mm gun.

The Canadians supplied the answer. They mounted a 25 pounder gun-howitzer on the hull of a Ram tank (Canadian copy of the M3), in a similar mounting to that used on the Priest. After trials, the Canadian government ordered 124 vehicles, and the vehicle was designated “Sexton” in May 1943. Following trials in the UK, the British government ordered 300 vehicles, although these were to be built on the hulls of Grizzly tanks (Canadian copy of the M4A1 Sherman). To distinguish between the two, the Ram-based vehicles were designated Sexton Mark I, and the Grizzly-based vehicles were Sexton Mark II. A Sexton GPO (Gun Position Officer) variant was also built. This had no gun, but an extra radio, map tables, etc, and was used to direct artillery fire.

With the Sexton, the British army finally had a self-propelled 25 pounder that it was happy with. Sextons saw combat in Italy and north-western Europe, including the D-Day landings. It remained in British service until 1956.