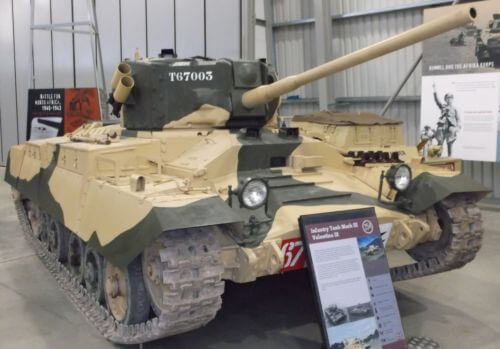 AFV Alphabet: V is for Valentine

The Valentine tank (officially the Tank, Infantry, Mk III, Valentine) was a British World War II infantry tank. It entered service in 1940, and proved to be a very reliable design. It saw combat in North Africa, Madagascar, the Pacific and in Russia (over three thousand were supplied to the Soviet Union under a lend-lease arrangement).

Originally armed with a 2-pounder gun, later versions had a 6-pounder or 75mm main gun. The Valentine was used as a basis for several variants, some of which were only used experimentally. These included a DD (Duplex Drive) version, primarily used for training, a CDL (Canal Defence Light) version, an observation post, mine clearers, bridging tanks, and flame throwers.