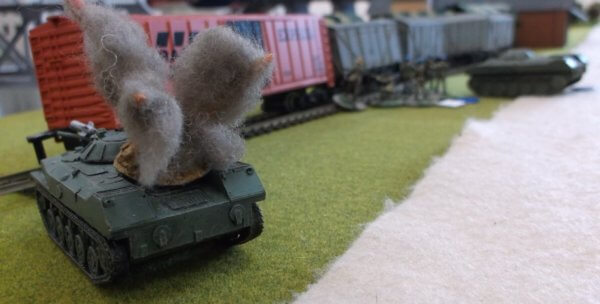 Over the weekend, I played in my second Crisis Point game (Crisis Point IV), organised by Richard Crawley.

This year, I played the Russians (I’d planned to play the Russians last year, but due to last-minute changes, I played the Andreivian Turks instead). Mark Kniveton provided much of the Russian forces, and was my co-commander. On day 1, we had a force of naval infantry that were trying to break out of a small beachhead on the coast at Mdinar. We were opposed by Andreivian government forces, ably commanded by Ian Shaw.

The light armoured vehicles didn’t get far out of the town before being destroyed by the government forces. The government’s hotch-potch of vehicles (BMP-1s, emplaced T-34/85 turrets, and a T-62) were able to make short work of the Russian BMP-2s, BRDM-2 and PT-76. The supporting armour (a platoon of T-80s) fared better, but were wary of advancing too close to the enemy infantry without their own infantry support.

Even government air strikes and reinforcements (in the form of a platoon of JS-IIIs) couldn’t stop the relentless Russian armour. When the light faded, the government forces used the cover of darkness to retreat. This allowed the naval infantry to head to the airport to support the VDV that had previously captured it, in their effort to take the bridges leading to Tcherbevan.

On day 2, Mark and I commanded the VDV forces that had previously secured Tcherbevan International Airport. We had orders to take the bridges leading to the city centre. With a platoon of BMDs and a pair of ASU-85s, we set out to extend the hand of friendship and offer support. We were, after all, in the country to offer help to a neighbour.

We soon discovered that the railway marshalling yards were home to a band of fanatics in government uniforms. Unsure whether or not they had anti-tank weapons, the armour held back, providing supporting fire to the brave paratroopers as they charged in.

The fanatics called for air support from the Andreivian government. On the previous day, a Russian Su-25 Frogfoot had been driven off by Andreivian air defenses. Today, a well-aimed SA-7 missile from a brave Russian paratrooper shot the Andreivian Jaguar down. Being fanatics, most of the defenders refused to run, and stayed their ground until they were over-run and captured.

Elsewhere, NATO had also called in air support. Realising the awesome efficacy of the Russian air defences, they first reached an agreement with the Russians. Thanks to this agreement, their aircraft and helicopters were able to continue their mission without hinderance.

The government provided further support, in the form of a Type 61 tank on the far side of the river and a gunboat mounting a T-34/85 turret. These proved rather more effective than the air support, destroying a BMD.

By the end of the game, the railway marshalling yards had been cleared of fanatics. VDV troopers had taken possession of one end of one bridge.

Like last year, it was an excellent weekend. The gaming was fun, and the food at the local pub (the Royal Hotel) was both excellent and plentiful. My thanks to everyone involved. Hopefully I will see you all next year 🙂