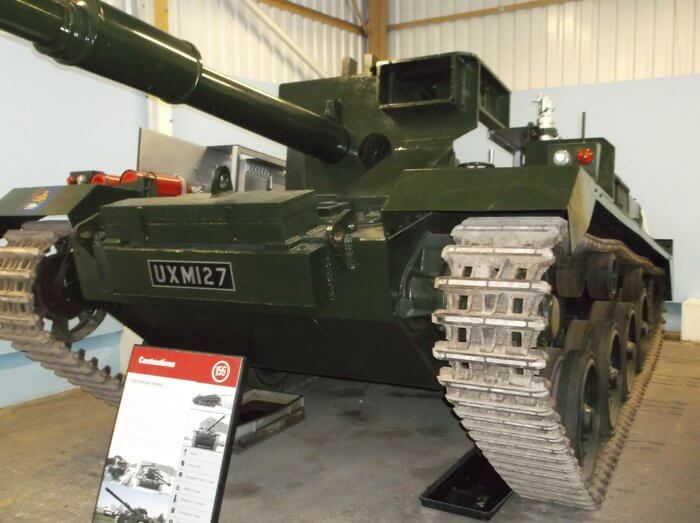 In the 1950s, the British army investigated the possibility of a main battle tank weighing around 20-30 tons. Named the FV4401 Contentious, it was part of Project Prodigal, which eventually led to the highly successful CVR(T) range, some of which are still in service today.

Contentious was envisioned as a small tank, but with armour protection and firepower comparable to contemporary main battle tanks. It would have a crew of two, and both wheeled and tracked chassis were considered. A 20 ton vehicle could be air-dropped from a Beverley transport aircraft. At the higher end of the weight range, it could have a fully-enclosed crew compartment with overhead armour and NBC protection.

Contentious had a number of innovative features, and armour was one such area. The glacis plate was to have horizontal ribs, which would break up kinetic energy rounds and provide a high degree of protection against HESH. Behind this plate was a gap of four feet, which was to be filled with fuel. Every 3″ of fuel provided protection equivalent to 1″ of armour, so the fuel tank added protection equivalent to a 16″ thick armour plate. The back plate, behind the fuel tank, was 40mm thick. This arrangement was found to be invulnerable to Conqueror’s 120mm gun at point blank range, and all known anti-tank guided missiles. Side skirts were also to be fitted, and internal linings would protect the crew from nuclear radiation and back-spall armour fragments.

At first glance, using fuel as armour would seem to be nonsensical. However, tests carried out showed that this presented little extra risk, especially when using diesel fuel. If the fuel tank was penetrated, fuel would obviously leak. This presented the risk of an external fire, and was more likely when the ambient temperature was higher. None of the tests led to an external fire with diesel, although it was likely in tropical environments. If an external fire was started, leaking fuel would keep it going. Such an external fire, however, presented little risk to the crew of the vehicle. If the fuel tank was partly empty and fuel vapour was present, there was a risk of explosion within the fuel tank. Such an explosion could be contained with even 5/16″ mild steel plate, so an armoured fuel tank, such as was planned for Contentious, would easily contain the explosion. A greater concern was the loss of fuel, and so the fuel tank was to be compartmentalised to minimise fuel loss.

Although a missile-based armament was considered, it was decided that a gun would be preferable. APDS offered a high hit rate at ranges out to 2,000 yards, along with a short time to firing the first round and a fast rate of fire. A missile was considered to offer a slight advantage in lethality, but this did not outweigh the advantages of a gun, which also offered better reliability. The possibility of adding a 76mm non-recoiling gun was mooted. This would have been rigidly fixed to the main armament, and used for HE.

Contentious would have a crew of two, who would sit side by side. An automatic loading system was to be fitted, so the crew would consist of commander and driver/gunner. A ranging machine gun was considered, but in the end, it was decided to use an optical range finder (not a laser, as I had originally thought), which was expected to have an effective range of around 2,000 yards. This would be connected to a servo to allow automatic adjustment of gun elevation. The system would reduce the time to aim and fire the first round from 8-10 seconds down to just two seconds. At least twelve targets, at random ranges of up to 2,000 yards, could be hit within 60 seconds.

Each crew member would have a full set of driving and gunnery controls, so the commander could fire if required. The envisioned procedure was that the commander would find a target, turn the vehicle roughly to bear, then stop the vehicle. The gunner would then aim the gun and fire. The expectation was that this would not take significantly longer than with a turreted tank, but with the advantage that the frontal armour would always face the target.

As well as tracks, a wheeled chassis was considered. This was to have six driven wheels, and was expected to have a range of over 1,000 miles, compared to around 500 miles for the tracked chassis. The wheels were to be five feet in diameter, with non-pneumatic tyres to reduce vulnerability. They were to have retractable spuds for greater traction on soft ground. The engine requirement was for a multi-fuel engine of 350-500bhp. In the late 1950s there was no such engine available, and the plan was to develop one based on contemporary main battle tank engines.

The possibility of air-dropping the vehicle was an important consideration, as it was felt such a capability would greatly increase their usefulness. Initial trials based on a 20 ton replica vehicle were carried out with Beverley aircraft in November 1956. To minimise weight, a separate platform was not used – air bags and skid boards were attached directly to the vehicle hull. These initial trials showed promise, and so a full research project began in July 1957, to develop a method of dropping tracked vehicles weighing up to 20 tons. By November 1959, they had shown that it was feasible to drop vehicles of up to 17.5 tons, and progress was being made towards the eventual target of 20 tons.

Contentious had some physical similarities to the Swedish Strv 103 “S-Tank”, but unlike the Swedish vehicle, it was not intended to replace conventional main battle tanks on the front line. The 20 ton, air-droppable version would probably have been used for rapid deployment scenarios, especially where main battle tanks would be encountered in the enemy forces. Indeed, a presentation to the US Army mentioned that it offered “the unusual possibility of an armoured fighting force which can rapidly be assembled at any global point”.