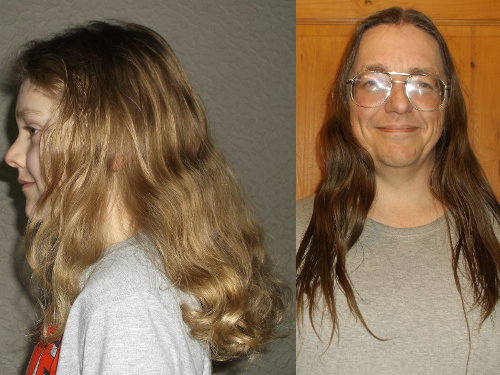 Almost thirty years ago, on 26th April 1986, there was an explosion and fire at the Chernobyl nuclear power plant in the USSR. Thirty-one people died during the accident. Today, the local children still suffer. As well as the obvious effects from lingering radiation, many are left orphaned when their parents succumb to the same effects.

My seven-year old son and I both have long hair. We have decided to cut off our pony tails to raise money for Chernobyl Children’s Project (UK), who help the children that are still suffering from the after-effects of the Chernobyl disaster. The hair itself won’t be wasted – it’ll be sent to The Little Princess Trust, so that they can make wigs for children that have gone bald due to chemotherapy treatment.

We’ll be cutting our pony tails off (and getting our hair cut very short – probably a grade 2) on the 19th of April. In the meantime, please donate in one of the following ways:

We’ve set ourselves a target of £500. Anything you can give will be gratefully received, both by us and by the children of Belarus.

Remember Chernobyl? The kids who live there still suffer. Please help my son and I to help them – Click to tweet

Buy This Book Online
Get it direct
DriveThruRPG
itch.io
StoryOrigin