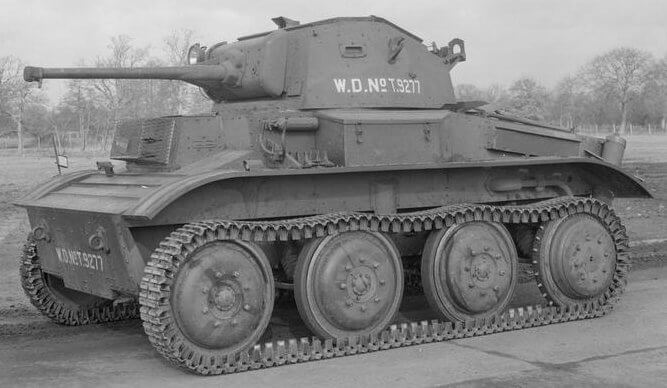 In defence of the Tetrarch

Yesterday, Bovington Tank Museum posted a photo on their Facebook page, of a Tetrarch light tank being loaded onto a Hamilcar glider. I don’t mind admitting that I have something of a soft spot for the Tetrarch, probably because they could be air-landed in a glider.

A couple of comments on the photo caught my eye. I didn’t respond to them, because I’m not really a fan of Facebook in general, and I particularly dislike getting into arguments there. Instead, I decided to use them as prompts for a blog post 🙂

One person said that the Tetrarch was “obsolete at the start of the war, never mind 1944“. Although I agree that it was obsolete by 1944, I certainly don’t agree that it was obsolete in 1939. It must be remembered that the Tetrarch was a light tank. Its role was reconnaissance, not fighting other tanks. None the less, the Panzer III, which was intended to fight other tanks, had a 37mm main gun, comparable to the Tetrarch’s 2-pounder (40mm). Armour protection on early models of the Panzer III was also comparable to that of the Tetrarch.

A second person suggested that the British would have been better served using Daimler armoured cars instead of the Tetrarch. He notes that the Daimler had similar armour, identical armament, and better performance. On the face of it, this seems like a good point. While I don’t know the actual reasons Tetrarchs were used, I can suggest some possible ones.

First, performance. The Daimler was about 10mph faster on roads. A quick check didn’t reveal how they compared off-road, but tracked vehicles generally perform better than wheeled, so I suspect the Tetrarch’s off-road performance was at least comparable, if not better.

Second, size. The Daimler was taller and wider than the Tetrarch. The Tetrarch was a tight fit in the Hamilcar glider, so it’s entirely possible that the Daimler simply wouldn’t fit.

Finally, morale. Tanks, even small ones, are more impressive than armoured cars. The Tetrarchs were landed late on the first day of the Normandy landings. German defenders seeing the tanks wouldn’t necessarily realise that they had been landed by glider. That could lead them to believe that the invasion was progressing at a rapid pace, reducing their morale and their willingness to fight. Conversely, the men landed by glider and parachute would probably get a larger morale boost from having tanks, rather than armoured cars, alongside them, regardless of the actual effectiveness of the two vehicles.

The Tetrarchs were certainly obsolete as front line tanks by 1944, though probably still better than no armoured support at all. They were all retired in late 1944, replaced by the M22 Locust, a light tank purpose-built to be carried by glider.