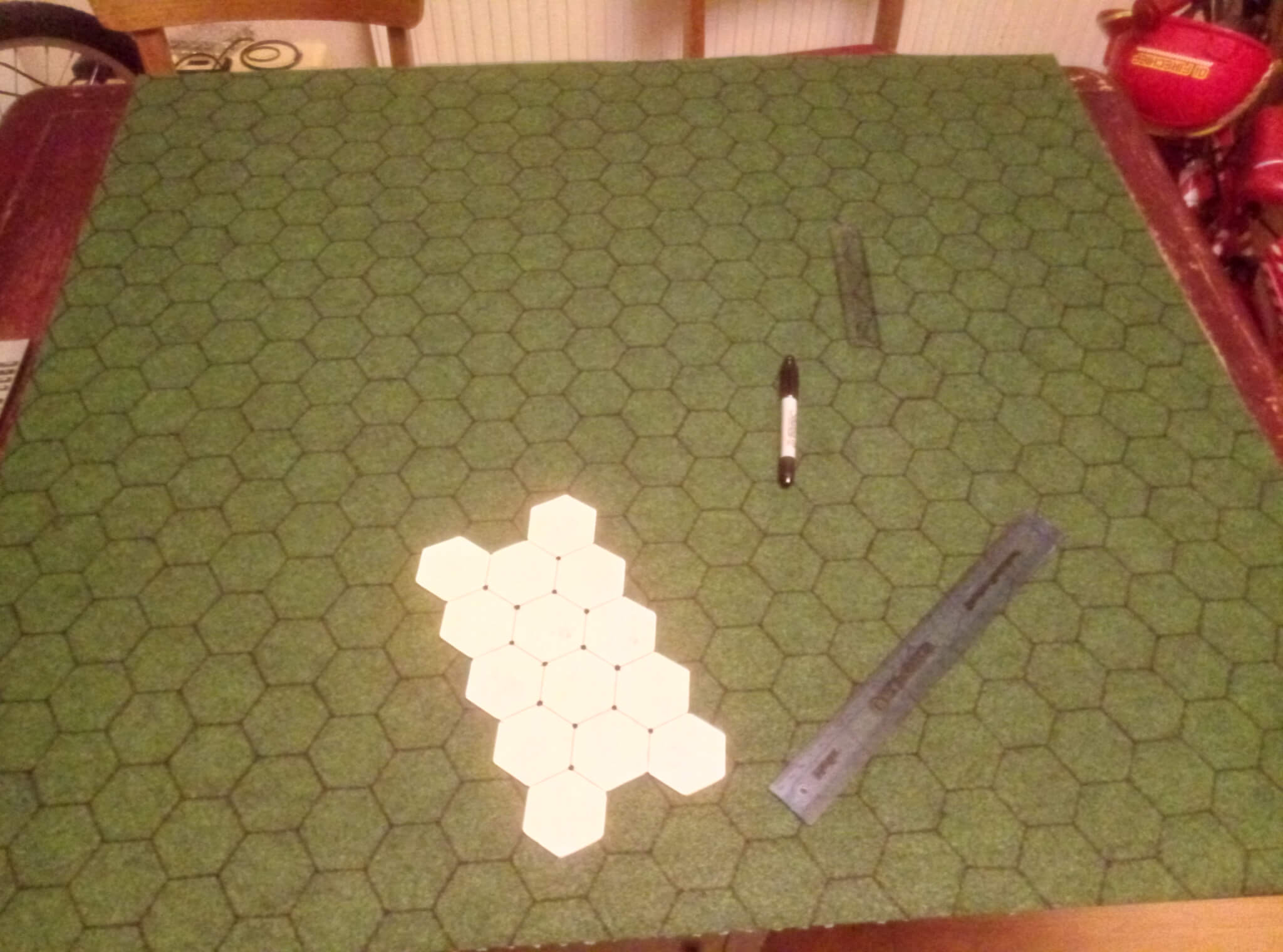 The Joy of Hex — Making a Hex Mat for Wargaming

A little while ago, I decided to try miniature wargaming on a hex grid. There are plenty of companies that will supply wargaming mats printed with hexagons or squares. I already had two plain green mats that I’d bought cheaply, and didn’t really want the expense of a commercially-printed mat, so I set out to turn one of them into a hex mat.

First, you need a paper template. I used the graph paper PDF generator at http://incompetech.com/graphpaper/hexagonal/ to create a PDF file with hexes 2″ across, then printed it onto ordinary paper.

Keep the margins as small as possible, so that you get more hexes on the paper. I didn’t do this, and regretted it, so learn from my mistakes! More hexes on the template make it quicker and easier to draw the hexes onto the mat, and the end result will be better quality. Cut the hexes out, and use a sharp pencil or similar to make a hole at each corner. This is your template.

Place the template in one corner of your mat and use a Sharpie or similar to mark the position of each hole. I used a black fine-point Sharpie, but of course the thickness and/or colour can be altered to make the hex lines more or less obvious, according to your preference.

Move the template away, and use a ruler to draw lines between the dots to make the hexes. Line up your template against the newly-drawn hexes and repeat. If your dots are visible enough, it may be better to mark all the dots, then add the lines. I didn’t do that, but it would allow for some correction as you draw in the lines.

It took me about four and a half hours to draw hexes on a 36″ x 39″ mat. That time included several interruptions because my five-year old daughter was having trouble sleeping. Without those interruptions, I estimate that it would have taken about three and a half hours.

From a distance, the end result looks good, although close up, it becomes obvious that the hexes aren’t all exactly the same size or perfectly even. No doubt a commercially printed mat would be much better quality, but the end result is good enough for my purposes.

A potential alternative to hexes is offset squares. I’ve never used them, so I don’t know how well they work, but they might be easier to draw, and I’ve seen them suggested as a useful compromise.

The Case for Hexes

My first experience of wargaming was board wargaming, where hexes are the norm, although some games use squares or areas. I’d not used hexes for miniatures until I played the first game on my new hex mat, and I was pleasantly surprised at how well they worked. Not needing to use a tape measure seemed to speed the game up much more than I’d expected, and I liked the complete certainty about what type of terrain a given unit was in. Each hex was wooded or not, for example, so if a unit was in a wooded hex, it was in a wood, and as soon as it moved out of that hex, it was no longer in the wood. There was no possibility for a unit to be only partially in a given type of terrain.

I’ve only used my hex mat for games with 3mm models, where each base represents a platoon. My hexes were sized so that each hex will accommodate a single base, and this seems to work well. I don’t think hexes will work very well for skirmish games with larger figures on single bases, however. In those types of games, I think I’d find the hexes too restrictive, and so I’ll stick with tape measures for those.

Hexes work for me, at least for higher-level games using small scale figures. If you want to give them a try, hopefully this article will mean that you’re able to create your own hex mat reasonably quickly and cheaply.