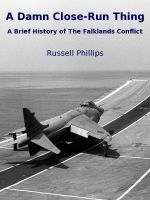 Here is the blurb:

In April 1982, Argentina invaded the Falkland Islands, a British dependency in the South Atlantic. The small British and Falkland force on the islands was soon overcome, and the Argentinians occupied the islands. The British response was to form a task force to sail to the South Atlantic and re-take the islands. This was a major undertaking, and Major-General Sir John Jeremy Moore later described the ensuing conflict as "a damn close-run thing".

This short history includes a summary of the events preceding the war, without which the war itself cannot be properly understood. It shows why the ruling military junta in Argentina believed that an invasion would not be opposed. As well as describing the major military actions of the war, it also includes details of an Argentinian plan to sink a Royal Navy ship in Gibraltar harbour (foiled at the last minute by Spanish police) and an audacious British plan to land SAS soldiers in Argentina to destroy exocet-carrying aircraft while they were still on the ground.