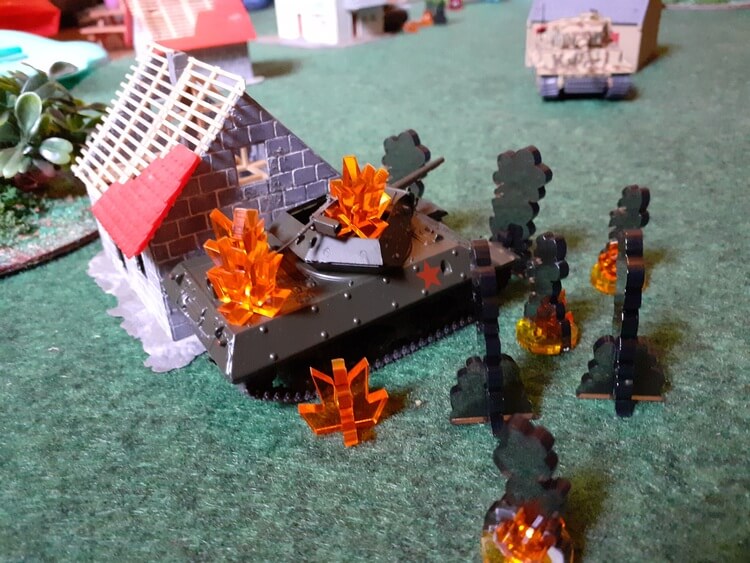 I’ve written before about getting kids started in wargaming. Since writing that post, I’ve played several games of Panzer Kids by Peter Schweighofer. This is a set of rules for tank actions during the Second World War, specifically aimed at children. It’s available in two versions, basic and deluxe. The basic version is “pay what you want” and has the base rules and stats for several tanks, so you can give it a try without spending any money.

The deluxe version adds optional rules for wrecks, flank shots, damage, close range, hull-down, hull guns, anti-tank guns, elite units, roads, mine fields, objectives, and micro scale miniatures. It also has four scenarios, a brief history of the war, stats for most of the tanks and anti-tank guns used during the Second World War, and instructions for working out stats for other vehicles.

Both versions include a “Mind Your Manners” section. Most of what is covered here should be obvious to adults, but may not be so obvious to children. The rules themselves are very simple, as you would expect. The basic mechanism is to roll a D6 and add the score to the attacking tank’s attack value. If the result is greater than the target’s defence value, it takes a hit. Once a tank takes three hits, it is destroyed.

My daughter enjoys Panzer Kids, and I enjoy playing it with her. It’s a very different experience to playing against an adult, and can be frustrating. She tends to be very cautious, moving her tanks into cover as soon as possible and refusing to budge. She also gets distracted and plays with other toys sometimes. In one game, she used a syringe from a hospital set to give one of the tanks an injection. We use Litko blast markers to mark hits on tanks, which adds to the visual appeal. When a tank is destroyed, she insists on covering it with multiple smoke and blast markers. At first, she got upset when tanks were destroyed, because she assumed that all of the crew had been killed. She felt a lot better when I told her that crews often bailed out and survived.

Overall, it’s an excellent set of rules. I recommend them to anyone with an interest in playing Second World War armour actions with children.