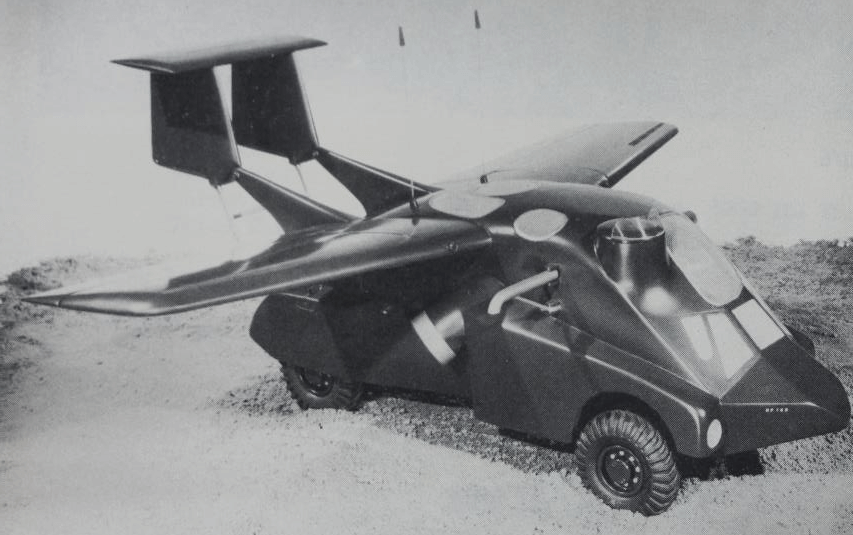 On a visit to the National Archives, I ordered document AVIA 65/1540, “Project PRODIGAL: army vehicle with limited airborne capability”. I was expecting it to be about FV4401 Contentious, a possible design for an air-portable tank destroyer. In fact, it was about something quite different — flying cars! This article is based on that document.

In the late 1950s and early 1960s, the British army’s Fighting Vehicles Research and Development Establishment (FVRDE) investigated possible future fighting vehicles. A number of investigations were launched, all under the name “Project Prodigal”. One such investigation was FVRDE specification 9258, for a scout car with a limited ability to fly. The specification was vague regarding the flight capability, which could be limited to jumping over obstacles, or extend to steady flight for several miles.

The vehicle was envisioned primarily as a ground vehicle with good cross-country performance. Flight was only to be used when it was unable to continue over ground, since it was felt that the enemy would be less likely to detect a ground vehicle. The requirement was for a vehicle no larger than 16 feet long and eight feet wide. It was to have a crew of two, and no armament was specified, though it was to carry radios and have sufficient fuel to travel at least 200 miles on the ground. Armour protection was not required, since it was understood that weight would be at a premium.

Nine potential solutions were submitted, by seven companies. None of them appear to have got as far as the prototype stage. Data sheets and small-scale models were prepared, which offer a fascinating glimpse into what might have been.

The flight capabilities of the submissions varied greatly, but all were able to perform the minimum requirement of jumping over an obstacle 30 feet wide and 10 feet high. Each vehicle was air-transportable by either a Blackburn Beverley or an Armstrong Whitworth AW.660 Argosy aircraft. Most provided sufficient cross-country performance, and were able to carry the required payload. The single exception was the Bristol Siddeley submission. This was a privately developed light vehicle with limited cross-country performance and half the required payload. The payload could be increased, but this would have come at a performance cost.

This vehicle consisted of a four-wheel drive ground vehicle with helicopter rotors added. The rotor assembly was taken from a Wasp helicopter, and the base vehicle was similar to a Champ or Land Rover. When being driven on the ground, the tail assembly folded over the rear of the vehicle, reducing the length, and the main rotor was folded back.

Although the rotor assembly was taken from a Wasp, the rotor control system was altered. Stability was emphasised at the cost of manoeuvrability, to make the vehicle easier to fly.

Preparation for flight involved unfolding the tail assembly and the rotors, and was expected to take between ninety seconds and two minutes.

This design was for a land vehicle with folding wings and tail unit for flight. In the initial (mark 1) design, two engines were required for flight. One powered a large fan to provide lift, and a second provided lift or thrust via swivelling side nozzles. The mark 2 design replaced these two engines with a single BS 53/5 engine.

When jumping, the tail unit was extended, and the fan and nozzles provided the lift. If wing-borne flight was required, the tail unit would be extended, then the vehicle would take off vertically, using the fan and side nozzles, rotated to point down. Once airborne, the wings would be extended. Flight controls were similar to those of a conventional aircraft, although ailerons and rudder were inter-connected, to simplify flying.

The vehicle had a light alloy frame, with light alloy or glass fibre panels. It was to be lightly armoured, although armour thickness was not specified.

The vehicle could perform 45 jumps of 1,000 feet distance each, or fly just over 200 miles in one hour. With a long range fuel tank, flight distance could be extended to over 300 miles.

Vickers worked with English Electric on their proposal. This vehicle had four fans, one at each corner of the vehicle, driven by a pair of DH Gnome gas turbine engines. Forward propulsion was by tilting the vehicle. It could perform 50 jumps of up to 1,000 feet, or fly for 30 minutes at a speed of between 50 and 70mph.

Little consideration had been given to stability in flight, which the US had found to be an issue with four-fan vehicles. There were also concerns about visibility, since the driver was placed some distance from the front of the vehicle.

Both fan and ground engines were gas turbines, simplifying logistic issues by only requiring a single type of fuel. The fan was tilted forward to provide forward motion, and stability was provided by jets at the corners of the vehicle. Extra movement in the steering column allowed the normal driving controls to be used in flight.

The vehicle could reach altitudes of up to 10,000 feet, and could fly at 70-80mph for one hour. As designed, it could not carry the required payload. The full payload requirement could be achieved by sacrificing an engine or a quarter of the lift fuel. In the latter case, the flight time would be reduced to 45 minutes.

Boulton Paul’s vehicle had a light alloy structure with a large central fan. The ground performance was expected to be comparable to that of the Ferret scout car.

Forward propulsion was by tilting the vehicle. Jets at the corners of the vehicle provided stability and control, using the gyroscopic effect of the engine in a flexible mounting to detect changes. In flight, it was steered using the same controls as on the ground.

Airborne range was 43 jumps of 1,000 feet or a single long flight of 18 miles at 60-70mph. A second proposal was submitted, which used a different engine arrangement. This reduced the control power required, but also reduced airborne range slightly, to 40 flights of 1,000 feet.

This was another design with a large central fan. Forward propulsion would be provided by tilting the engine and the vehicle itself. Pipes extended from the corners of the vehicle to provide stability, using a system similar to the one used by the Short SC.1 experimental VTOL aircraft.

Control in flight used a small joystick, which was considered difficult for test pilots and almost certainly unsuitable for use by army drivers. On a more positive note, the vehicle was small and had good ground performance.

Two marks of this design were developed, each using a large fan for lift. The mark 1 had swivelling spherical nozzles, and three hydraulic jacks to provide extra lift at take off. The mark 2 used side exits with nozzles to provide lift or thrust. Pipes at the sides, front, and rear provided control. The flight controls were separate from the driving controls. Interestingly, ejector seats were included in the proposal.

This vehicle emphasised ground performance, with a jumping, rather than full-flight, capability. It had large contra-rotating fans driven by compressed air. The compressed air was supplied from storage bottles, which held enough for two jumps of 30 feet at a height of 10 feet. Once the air was used up, it could be recharged from the engine, taking at least seven minutes. Recharging could be done while the vehicle was moving.

Pipes at the corners of the vehicle provided stability, and the driver had little control during flight, with pre-programmed vertical flight path. Forward propulsion was provided by tilting the vehicle, or by momentum, taking off whilst moving forward. It was believed that a jump of up to 750 feet would be possible by performing a high-speed take off, and using both air bottles to give 20 seconds of flight. The vehicle could swim across rivers, and a hovercraft modification was also suggested.

Although the flight performance was less impressive than other submissions, it was relatively inexpensive, and offered near-instant flight provided the air bottles were charged.

Unlike the other Westland submission, this vehicle was not capable of full flight, only jumps of up to 80 feet. It had a good cross-country performance, and a pair of large contra-rotating fans, powered by the road engine. To jump, the fan would be brought up to a high speed, then the blade pitch would be changed to provide lift for up to five seconds. Blade pitch was automatic, but the driver had a limited ability to control the landing.

Forward propulsion was provided by inclining the duct or tilting the vehicle. Control fans or pressure jets at the corners would provide pitch and roll. Flight controls were separate from the driving controls.

Since the fan was driven by the road engine, the number of jumps was only limited by the fuel available for ground travel. Fifty jumps could be performed with a road range of 200 miles. For every extra jump, four miles of road range were sacrificed.

Like the Folland design, the vehicle could swim across rivers, and interestingly, it could perform a jump from the water. One disadvantage of this design was noise. It was likely to be audible at twice the distance of the other ducted fan designs.

The idea never really progressed, and none of the designs even reached the prototype stage. Most designs were likely to be unarmoured, with the notable exception of the Handley Page 120B. Armour protection on that model isn’t specified, but weight considerations would have kept it very light, probably only proof against small arms and shrapnel at best. Armament was not specified for any of the designs, and it seems likely that they would have been unarmed.