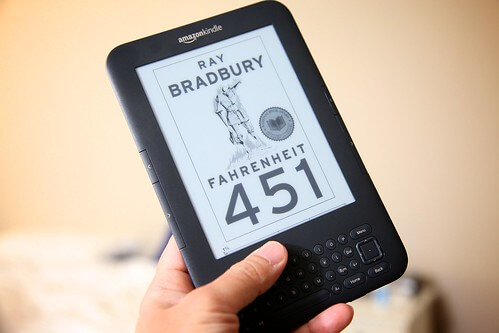 E-books have come in for some criticism lately. Jonathan Franzen, apparently one of America’s greatest novelists, thinks they have no permanence, and worries that they are “not compatible with a system of justice or responsible self-government“. Antonia Senior, writing in the Guardian, sneers at “genre fiction” such as horror, romance and science fiction.

I don’t understand the snobbery around books. I’ve read before that e-books give people more freedom to read what they want to read, and that freedom has led to more sales of genres like erotica, because when you read on an electronic device, no-one can tell what you’re reading. My wife tells me that she once saw the Children’s Laureate giving advice to a parent who was worried that their child didn’t read. He told her to let the child read anything they wanted. Comics, magazines, books, whatever. The thinking was that it was far better for the child to read a comic and enjoy it than struggle through The Lord of the Flies and hate it.

I agree with the above advice. Recently, I’ve read non-fiction titles about Operation Grief (a German WWII false-flag operation) and Lady Thatcher’s thoughts on the Falklands Conflict. I’ve also read fictional accounts of a third world war in Europe and the recovery of treasure from a sunk German WWII submarine.

Ms Senior says that “It’s not future classics that push digital sales, but more downmarket fare“, and I’ll freely admit that the two fiction titles mentioned above are very unlikely to be future classics, but so what? They were entertaining, and the more you read, whatever your choice of subject matter, the more you learn. When I was 10 years old, my class took a reading age test. One of the questions was about merchant ships. My friend didn’t know what a merchant ship was, but I did. I’d learned the term from reading Commando, Victor and Warlord comics. Reading those comics helped me achieve a reading age of 16 when I was 10 years old.

I’m pleased that people now feel that they can read what they like, without fear of strangers on the bus or train judging them. Far better that people read “downmarket genre fiction” than nothing, and let’s be clear – if people aren’t allowed to read what they enjoy, they won’t read. They’ll find some other form of entertainment. I’ve learned all sorts of odd things from reading fiction, but most of all, I’ve improved my ability to read and write.

Image credit: Fahrenheit 451 e-book on the Kindle by unten44, on Flickr.