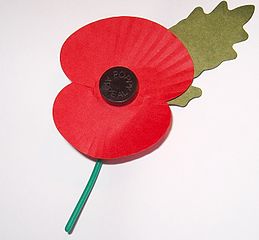 Today is Remembrance Day in the UK. I have a red poppy, and I shall be observing the two minute silence at 11:00. I’ve read things recently that have prompted me to think about why I consider Remembrance Day to be so important.

I consider Remembrance Day to be a time to remember everyone that has been harmed by war. Any war, any nationality, civilian, military, whatever. It’s a time to remember not only those that died, but also those that survived. Some have injuries that are plain to see. Others have mental injuries like PTSD, which are much less visible but can be just as debilitating.

It’s important to remember that, when you go to war, people will die. It’s obvious, yet people seem to forget it all too easily. I wear a poppy to remind myself and others of that simple truth. It is my eternal (but almost certainly naive) hope that the more people understand what happens during war, the less likely they will be to call for it in future.

The following poem from Siegfried Sassoon was written during the Great War, but is sadly still relevant today.

I knew a simple soldier boy
Who grinned at life in empty joy,
Slept soundly through the lonesome dark,
And whistled early with the lark.

In winter trenches, cowed and glum,
With crumps and lice and lack of rum,
He put a bullet through his brain.
No one spoke of him again.

You smug-faced crowds with kindling eye
Who cheer when soldier lads march by,
Sneak home and pray you’ll never know
The hell where youth and laughter go.

Source: The War Poems of Siegfried Sassoon at Project Gutenberg.