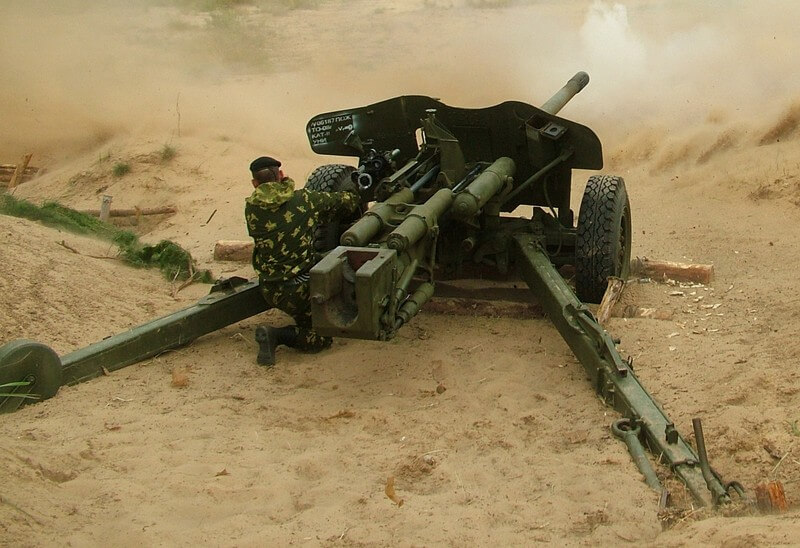 The T-12 was developed as a replacement for the D-48 85mm anti-tank gun, and was the first smoothbore anti-tank gun to enter service, in 1961. The decision to adopt a smoothbore barrel led to improved HEAT performance, higher muzzle velocity, and longer barrel life than an equivalent rifled barrel. The kinetic energy penetrator was very long and thin, further improving penetration.

Production of an improved version, the MT-12 (also known to NATO as the T-12A), began in 1970. This had a new improved carriage, which was less prone to turning over whilst being towed. Both models had sights for indirect fire and direct fire, but indirect fire range was limited by the maximum elevation of only 20º. The T-12 was normally towed by a lorry, the MT-12 by an MT-LB.

The crew of six consisted of commander, towing vehicle driver, gunlayer, loader, and two ammunition numbers. The barrel had a perforated muzzle brake, and was clamped to the trails when in transit. The loader had to open the breech manually to load the first round, after which a semi-automatic loading system would open and close the breech, so that the loader only had to load shells. Image intensifier night sights were fitted. A shield gave the crew some protection from small arms fire and shell splinters.

The MT-12 was the last towed Soviet anti-tank gun to enter production. Development began of a 125mm towed gun, the 2A45 Sprut, but this never entered production.