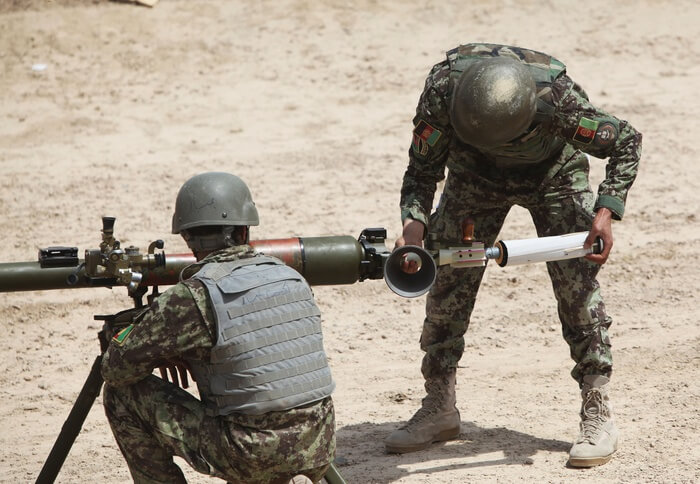 Introduced in the late 1960s, the SPG-9 was a light anti-tank gun mounted on a tripod, with a four-man crew. When first seen by the West in 1969, it was given the provisional designation B-1968. By 1972 the correct designation was known.

Light enough to be carried by two soldiers, it could also be towed on a small two-wheeled carriage or mounted on a vehicle. A lighter version, the SPG-9D, could be carried by one man, and was used by air assault and airborne units. The PGO-9M optical sight was provided for direct fire, but PGO-K9 optical sights and PGN-9 night sights were also available. A device sometimes seen above the barrel was initially thought by NATO to be a spotting rifle, but was later confirmed to be a sub-calibre training device.

The SPG-9 fired fin-stabilised HEAT and HE-FRAG ammunition. The propellant charge was contained in an extension behind the folded fins, and fell away from the rest of the projectile after leaving the muzzle. A rocket motor inside the projectile ignited twenty metres from the muzzle, accelerating the projectile to full velocity. This combination produced a high muzzle velocity of 435m/s and a final velocity of 700m/s. The HEAT round could penetrate 400mm of armour, at a maximum range of 1,300m. The HE-FRAG round had an explosive charge of 753g of TNT, with a range of 4,500m.