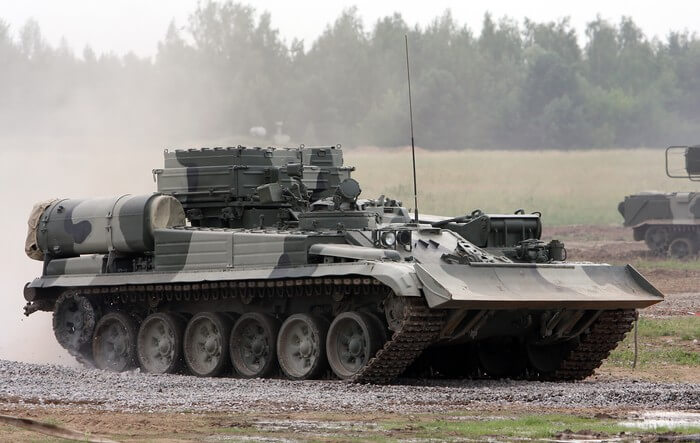 In contrast to the German army during the Second World War, the Soviet army did not have specialised recovery vehicles or tactics for using them. They started to experiment with their use at the end of the war, initially using locally-modified versions of existing vehicles, often turretless T-34s. After the war, they began producing dedicated vehicles with specialised equipment. One of these was the BREM-1, based on the chassis of the T-72 main battle tank.

Introduced in 1984, the BREM-1 had a crew of three (driver, commander, and mechanic), all of whom were provided with day and night-vision equipment. It had a top road speed of 60km/hour, a road range of 700km, and an off-road range of 500km. Towing another tank significantly reduced the range, to just 220km on roads. Like the main battle tank on whose chassis it was based, it had long-range fuel drums at the rear of the vehicle, which could be jettisoned if needed. An unditching beam was mounted underneath the external fuel drums. A large-diameter snorkel was carried on the rear right of the vehicle, which could be used for deep wading at depths of up to 5m.

A full set of electric welding equipment, including a working position, was carried in a hermetically-sealed panel over the left track. Special tools were carried in portable containers on a load platform. This load platform was located at the centre of the roof, and was 1.7m long and 1.4m wide. It had removable side panels, and could carry a load of up to 1.5 tonnes.

The BREM-1 had two winches, a plough, a bulldozer blade, and towing equipment. The mechanical main winch had a 200m cable and a basic capacity of 25 tonnes. Snatch blocks could be used to increase this capacity to 100 tonnes. The winch was normally used at the front, with the bulldozer blade to anchor the vehicle, but it could also be used to the rear for self-recovery.

The bulldozer blade was 3.1m wide and hydraulically driven, using controls at the driver’s station. A BREM-1 could use this blade to create an MBT firing position in 12 to 20 minutes, depending on the state of the soil.

For towing, the vehicle had a pair of 1.68m towing rods, with internal shock absorbers, and a pair of 5.5m towlines. Loads of up to 50 tonnes could be towed for prolonged periods, at the cost of greatly increased fuel consumption.

Other equipment included a 30-tonne capacity hydraulic jack, R-123U radio, tank telephone system, navigation system, and NBC protection. Armour protection was the same as the T-72 MBT, although the only armament was a 12.7mm NSVT machine gun with 840 rounds of ammunition. Four smoke-grenade dischargers were sometimes fitted, and all vehicles could create a smokescreen by injecting diesel fuel into the exhaust manifold.