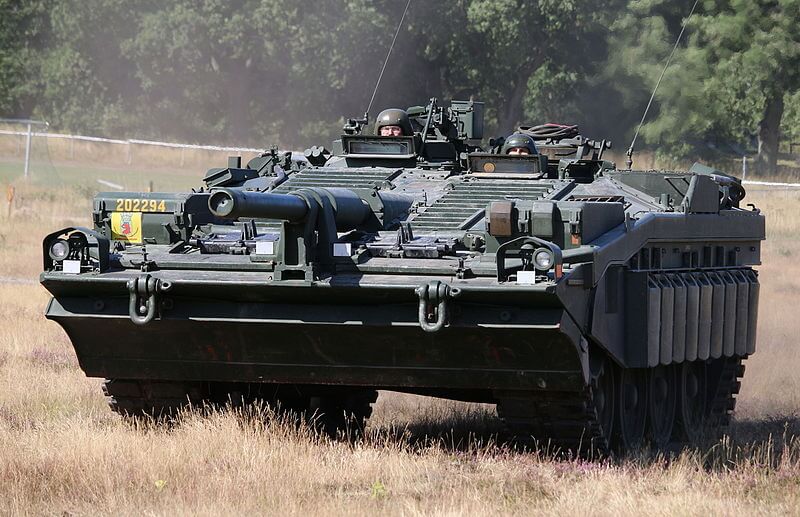 Development of the Stridsvagn 103 began in 1958, led by Bofors. A contract was awarded in 1959 for two prototypes, followed by a pre-production order from the Swedish army for 10 vehicles in mid 1960.

The initial two prototypes were finished in 1961, and differed from production vehicles. They had no return rollers, no support for the main gun, and five machine guns. One machine gun was fitted on the commander’s cupola, plus two pairs in boxes on either side of the hull, firing forwards. These prototypes were powered by a Boeing gas turbine and a Rolls-Royce petrol engine.

The pre-production vehicles replaced the right-hand pair of machine guns with a single 12.7mm ranging machine gun. Two return rollers were added to each track, and the petrol engine was replaced with a Rolls-Royce K60 multi-fuel engine.

The first production vehicles were finished in 1966. These did not have a flotation screen or dozer blade. Both of these enhancements were included on later production vehicles, which were designated Strv 103B. They were retro-fitted to existing vehicles to bring them up to the Strv 103B standard. Production continued until 1971, by which time 300 vehicles had been built.

The hull was of welded construction. The engine and transmission were at the front, reducing the chance of crew casualties from shots that penetrated the frontal armour. The fighting compartment was in the centre, with the ammunition at the rear.

The glacis plate had horizontal ribs that were intended to deflect armour piercing shells, and in time of war, an extra armour array was to be fitted to the front of the vehicle. This consisted of a series of vertical bars that would prematurely detonate HEAT rounds, and could also degrade the effectiveness of some types of kinetic energy shells. Damaged bars could be quickly replaced. The existence of this armour was kept secret until 1992, although it had existed for many years before then.

Main armament was a 105mm rifled gun. Designated the L74, it was 62 calibres long, and effectively a longer version of the British L7. An autoloader was used to load the gun from a magazine of 50 rounds. Typically, an Strv 103 would carry 25 APDS (later APFSDS), 20 HE, and five smoke, but any combination was possible. Rate of fire was 15 rounds per minute, with empty cartridge cases automatically ejected out of the hull. In the event that the autoloader failed, the radio operator could hand-crank the loading mechanism. The gun was securely clamped to the hull, and was aimed by turning the entire vehicle, with elevation controlled by adjusting the suspension. This was done automatically as the driver or commander adjusted their aim. The suspension was locked before firing to increase stability.

Secondary armament consisted of three 7.62mm Ksp 58 machine guns. Two of these were mounted in the front of the hull, on the left. The third was mounted on the left of the commander’s cupola. Aimed and fired from within the vehicle, this could be used for anti-air defence.

Strv 103s were not fitted with NBC protection, although it was prepared for one. The only night vision aids were infra-red driving lights. They were fitted with a flotation screen, which took 15-20 minutes to erect. The tank was propelled in the water by its tracks at a speed of 6 km/hour. When swimming, the driver stood on the rear of the hull, using a remote throttle control and reins attached to the tiller.

In late 1983, Bofors was awarded a contract to rebuild Strv 103B tanks to the new Strv 103C standard. The improved vehicles were delivered between 1986 and 1989. The Strv 103C introduced several improvements. The multi-fuel engine was replaced with a diesel engine, and an improved transmission was fitted. A laser rangefinder was incorporated into the gunner’s sight (but not the commander’s), along with a fire-control computer. A pair of Bofors Lyran illumination launchers were fitted to the roof to illuminate targets at night. In time of war, 18 fuel cans would be fitted to the sides of the vehicle, providing a degree of spaced armour as well as an extra 396 litres of fuel.

In the 1980s, the Swedish army started development of mine rollers. Production began in 1987, with delivery in 1989. The system used two sets of three heavy steel discs, suspended from a coupling. Couplings were produced for Centurion and Strv 103 tanks. The rollers would detonate pressure-activated mines, while a chain between the rollers would detonate tilt-rod detonated mines. Each set of rollers could detonate 15 to 20 mines before needing to be replaced.

The rollers weighed six tonnes, and the coupling an extra tonne. Rollers and couplings were transported in sections, on lorries fitted with cranes. It would take a tank crew 30 to 40 minutes to fit the rollers, and mine clearing could begin immediately. The tank would travel at 8 to 15 km/hour during clearing, and could go as fast as 25 km/hour for short distances.

Normal removal took 20 minutes, but in an emergency a set of explosive spring bolts could be fired, removing the rollers in five seconds.

Strv 103s were deployed in armoured battalions. Each battalion would have two tank companies, plus HQ company, pioneer company, artillery company and two mechanised infantry companies. Each tank company had four platoons, each of three tanks, and a mechanised infantry platoon. The infantry platoon had three rifle squads, each consisting of seven men carried in a Pbv 302. An armoured battalion would have two such tank companies