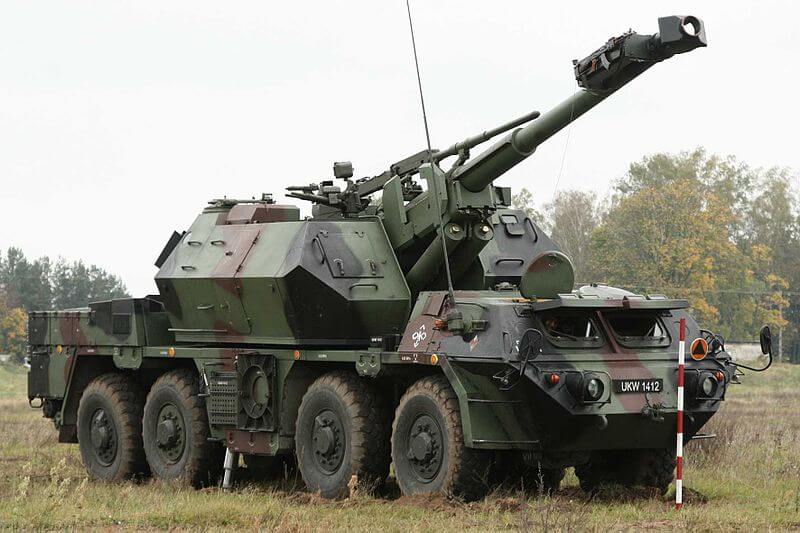 In the late 1970s, Czechoslovakia began development of a wheeled 152mm self-propelled gun-howitzer. The result was the vzor 77 Dana, which entered service with the Czech army in 1981. It had an eight-wheeled chassis based on components of the Tatra 813 8×8 lorry, rather than the more usual tracked chassis. The Tatra 813 had been shown to have a good cross-country capability, but its wheeled chassis was much cheaper and easier to maintain than a comparable tracked system. Since the Dana operated some distance behind the lines, tactical mobility was less important than on front-line vehicles.

The driver sat in the front compartment on the left, with the commander to his right. A large, fully enclosed turret was in the centre, with the engine at the rear. Armour was sufficient to provide protection against small arms and shell splinters. The vehicle had a central tyre pressure regulation system and power steering.

The 152mm gun-howitzer was fitted with a muzzle brake, and could fire the same ammunition as the Soviet 2S3 Akatsiya, as well as Czech-made ammunition. The vehicle had a fully automatic loading system, which loaded the projectile and the separate charge, and could operate at all elevations. Single shot or fully automatic fire modes could be selected by the gunner.

The Dana took two minutes to prepare for firing after coming to a halt, and required one minute to prepare to move off after the last round had been fired. Hydraulic jacks were lowered before firing to ensure a stable platform. Sights were provided for direct fire as well as indirect fire. Up to 60 rounds of ammunition could be carried, but road speed was reduced if more than 40 rounds were carried.

The turret was made up of two distinct parts, with the weapon mounted externally between them, ensuring that no fumes could enter the interior. The turret could only rotate through 225º. Each side of the turret had access doors, roof hatches, and vision devices. The gunner and loader operator were in the left half of the turret, with the ammunition handler, who set the fuses, in the right half.

A 12.7mm anti-aircraft machine gun was fitted to the turret roof on the right side, and could also be used in the direct fire role. An NBC system was fitted as standard.