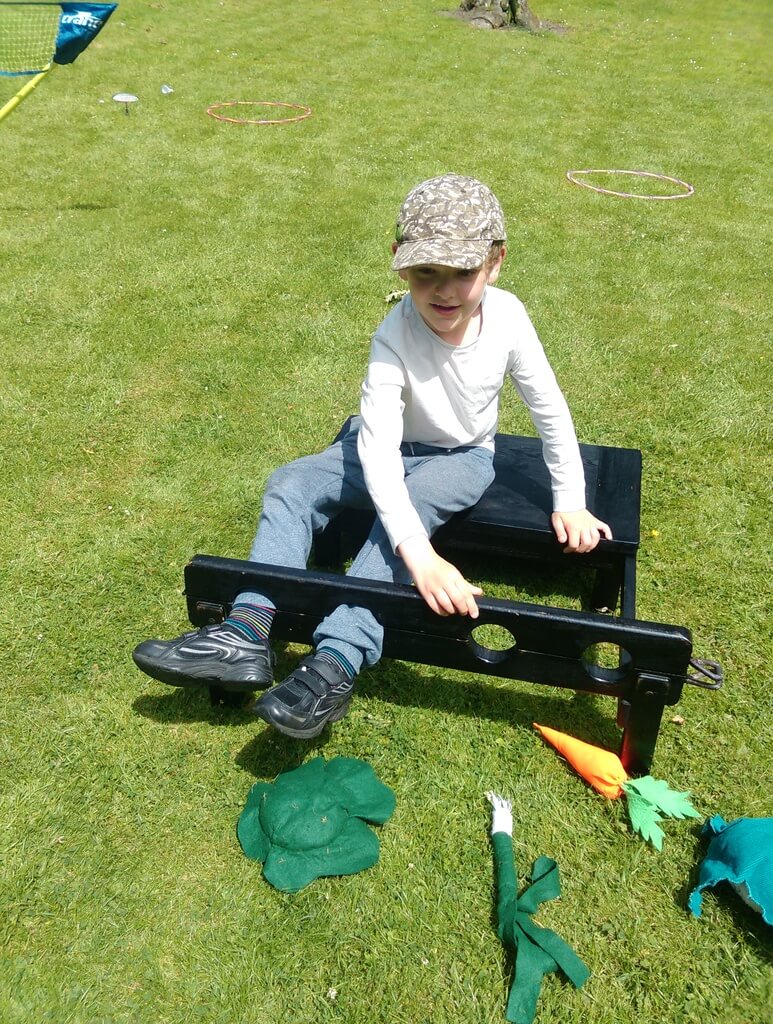 Getting Kids Started in Wargaming

For some time, I’ve been planning to introduce my nine year old son, Doug, to wargaming. He likes playing board games, including some aimed at adults, and he’s interested in history. We’ve now played a few games, and so I thought I’d write about the lessons I learned, to help anyone else wanting to introduce youngsters to the hobby. I’ve seen many complaints that there aren’t enough young people getting into the hobby. If you want to encourage younger people into wargaming, these notes might help.

One of the things that finally kicked me into trying a game with Doug was being able to get some very cheap die-cast WWII AFVs. I’m not normally a fan of soft plastic, but I use soft plastic figures and artillery pieces with Doug. I strongly recommend only using die-cast or soft plastic. Doug’s careful, but accidents are much more likely with youngsters, so fragile models really aren’t a good idea. In our case, Doug has a four year old sister, who can also cause accidents, even if she’s not playing.
If you use markers, aesthetically pleasing ones are better than plain ones. I use Litko acrylic markers that look like little explosions – little touches like that will go a long way to keeping children interested.

First, of course, you’ll need some rules. I’d planned to write some simple rules of my own, but then I happened to buy a copy of One Hour Wargames by Neil Thomas. They looked ideal, and so we tried a couple of games using the WWII rules. One thing that became quickly apparent is that the rules need to be extremely simple, much simpler than what I’d intended to write. Very few existing rule sets will be simple enough. Scenarios also need to be quite simple. If it’s too big, the child won’t be able to keep track, and will struggle to make decisions. Again, Neil Thomas’ book has a lot of useful, small scenarios included, which are ideal for this. Even then, children might need help working through potential tactics and options.

I’ve also played Memoir ’44 with Doug. This is a board wargame that uses soft plastic models on a hex-based board. The rule book suggests some slight modifications to simplify the game further when playing with young children. We played this simplified version of the rules, and Doug had no trouble understanding them. Memoir ’44 works well, but it uses cardboard counters as terrain, and if the table gets knocked, they can get dislodged. Small blobs of blu-tack can help, but that makes it longer to set up and take down. Make sure you play the scenarios in order. They start very simple (the first one, “Pegasus Bridge”, only has infantry) and gradually increase in complexity, adding other unit types.

When playing, I found it helped if I explained to Doug what I was doing and why. In Memoir ’44, for example, an infantry unit can move one hex and fire, or two hexes and not fire. So, I’d say something like “I’m just moving this unit one hex, so that it can fire”, or “I don’t want to fire with this unit, so I’ll move it two hexes.”

I took Doug to Barrage 2016, our local wargame show. Despite not having any money to spend, he was interested in looking at the traders stands, and asked questions about the models on display. Possibly unsurprisingly, a Warhammer 40,000 game took his interest, and he spent some time talking to the players and asking questions.

He also talked to the players of a WWII game, and played the German attackers in James Morris’s Fort Vaux participation game. He lost, but enjoyed it all the same. At one point he split the dice he had into two groups, telling me that the ones showing sixes were his “lucky dice”.

Children can be much more unpredictable than adults, which can be frustrating sometimes, but can also be challenging and interesting. Games with kids can be fun, and if they enjoy it they may eventually grow up to be adult wargamers, and that has to be good for the hobby as a whole.

All in all, we’ve both enjoyed the games we’ve played. I’m hoping that Doug will continue to enjoy playing, and as he gets older I’ll introduce him to larger scenarios and more complex rules.